Because, you know, I had nothing better to do. 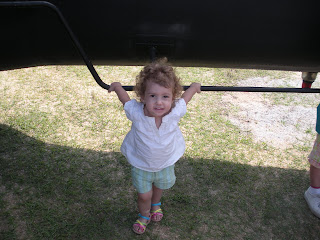 This is Hannah hanging on to a helicopter. Its not really related to this blog post, but it is pretty darn cute.


So, Monday. I'm doing the mom thing, hanging out with Hannah, doing random chores, and waiting to babysit my friend Allison's totally awesome completely adorable 8 week old son. Around 2 P.M. I notice I'm getting a little nagging headache and take two motrin. At 330 said friend Allison accompanied by said cute baby come over accompanied by devoted and doting daddy Mike. The baby sadly had been over-vaccinated....I mean, had his two month check up....that day and received some 5 shots plus some nasty liquid rotovirus. I'm sure someone thought it was a brilliant idea to pour liquified germs into our vulnerable baby's gullets, but that person probably didn't actually HAVE children. Allison figured he was really too fussy to leave, so they visited for a bit and then went home. I did try to hold the baby at one point, but after 30 seconds Hannah said "Mommy! Mommy! Give a baby back a Miss Allison!" So I did.

When they left my headache was worse, so I took a couple more motrin (bad nurse!). Around 7 p.m. it still had not subsided so I took a few tylenol(Ah! My liver!) and shortly after putting kids to bed I went to be myself figuring it was a migraine to which the only solution was deep, dark sleep. Thus followed a night of tossing and turning, with each toss and turn came increasingly painful shooting pains in my head and neck. By morning I could feel it going down my spine all the way to between my shoulder blades, I felt like vomiting, and couldn't tolerate light. It was at about this point that I thought, "Hey, for reals, something might be up with my brain". It must have been my awesome nurse assesment skills kicking in. Or maybe it was my husband saying "Ok, you need to go to the emergency room." One of the two.

He got the kids all ready for school, packed them in the car and I hobbled out as well, in the process repeatedly telling the kids who weren't being all that loud to STOP BEING SO LOUD. Daddy told them Mommy was sick. Hannah said she was sick too and wanted to go to the doctor. The boys seemed to be all too happy to get the heck out of the car and go to school.

Once everyone was dropped off we went to the E.R. on post. We sat in the waiting room, me with my eyes closed, until the triage nurse called us back. She was a little abrasive, and LOUD despite the description of my extremely intense headache, but whatever. Within 5 minutes we were back in a bay, where some kind soul had turned the lights out for me. The E.R. doctor came in shortly after I laid down and asked me a few questions, including "Have you ever had a headache like this before?" I mentioned in high school I had an aneurysm which resulted in some loss of speech and ability to write for a short period of time. His response was "Ok, we are going to move very quickly with you. Things are going to get a little crazy here, so don't panic." DON'T PANIC. Reassuring.

Next thing I know people are taking my clothes off and hooking me up to heart monitor, and sticking needles in both my arms and rushing me to CT. Dean was right by my side, holding my hand and covering my eyes to keep the light out. The doctor was concerned that I might be having a brain bleed. I came back and he told the nurse "Keep the curtain OPEN I want to be able to see her at all times." Once the CT came back negative everyone calmed down. He came back in, said my brain wasn't bleeding and instead I probably just had a nice case of meningitis which of course would entail a spinal tap.

Awhile later a small, frail looking, mousy resident with slumped shoulders tiptoed in and nervously presented the form for me to sign giving her permission to stick a large needle in to my spinal column. This made me very nervous. I signed the form and immediately regretted it. When the actual doctor came back in I told him I didn't want her to do the procedure. He reassured me she had the experience, I wasn't her first guinea pig, and he would be RIGHT THERE is she screwed up. I felt marginally better, only because he had enough confidence for both of them.

The tap itself went like this: I curl in to a fetal position on my side, tucking my chin to my chest. This was nearly impossible because, P.S. MY NECK FREAKING HURTS! But I did the best I could. Then some young man who I presume was a nurses assistant in a military uniform held on to my shoulder and hip to make sure I didn't move. Honestly, this was the worst part of the whole thing because he was A) Creepy and B) putting his crotch in my face. Luckily the nervous resident proceeded fairly quickly, the supervising doctor gave her a little direction, told me I had a mild case of scoliosis (awesome!), and after sticking me a few times to make sure I was numb enough she got the actual tap done on the first try. Post-tap I just had to lay flat for as long as possible, but no less than 30 minutes.

After a little more than an hour the doctor came in and said "One of us has white blood cells in their spinal fluid! Want to guess if its you or me?" I said "You?" and he laughed and said "You've just earned yourself an overnight stay at our lovely hospital." The blood work and spinal fluid suggested it was most likely viral meningitis but they have to culture it, which takes 24-48 hours and standard procedure is to hospitalize the person and treat them as IF its bacterial just to be safe. I got my first does of antibiotics in the E.R. at that point, Rocephin, and the admissions nurse came to see me. I got really stuffy at that point and my nose was swollen when the Staff doctor who would see me inpatient came by and she asked "Are you sure its not a sinus headache?" Uhm.....yeah its totally my sinuses and I just put white blood cells in my spinal fluid to throw you guys off track....No, I told her, I was just fine until a few minutes prior and thought maybe some of the cleaning supplies they had used in the bay next to mine were bothering me or maybe it was the patient who just came in after being peppersprayed....I don't know.

When I got up to my room I had a neat little box on my door with a big sign on it saying AIRBORNE PRECAUTIONS and DO NOT ENTER BEFORE REPORTING TO NURSES STATION or something like that. Everyone who came in wore masks. It was freaky. It was like I was the patient and not the nurse! Oh wait. I was. And let me tell you, its a hell of a lot more fun to be the nurse. I am not a big fan of the being the patient business. But my nurses were super nice and got me all settled and gave me pain medicine which made them basically my new best friends. Around 7 P.M. they came in and gave me another IV antibiotic, Vancomycin. This is a one hour infusion. Approximately 20 minutes in I very suddenly became itchy all over and turned bright red from head to toe. The itch though was incredibly painful, more like being covered in fire ants. I called the nurse and she came in and said something along the lines of "Holy CRAP! You're all red!" and turned the antibiotic off. She called the doctor to get me some benadryl IV, which worked like a charm. I felt like I could literally feel it going through my veins calming the itch as it spread. She said "Well I guess you won't be getting any more of THAT" and slapped a big ol' red allergy band on me. And then I went to sleep, because benadryl is the nectar of the gods.

I woke up at one point when the night shift nurse came in, but it was dark and I was still drugged. I think I asked for a pain pill. Then I went back to sleep.

Around 3. A.M the nurse came in to hang the second dose of Rocephin, the same thing I got in the E.R. I didn't hear her or see her, but I woke up at 3:30 very suddenly with marshmellow hands and Angelina Jolie lips with complimentary hives and the same intense fire-y itch. Called the nurse. The swelling, especially of my face, seemed to be cause for much more alarm and she called the doctor to come see me. They were at my bedside, two of them, within 2 minutes asking me how I was breathing, if I felt any tightness in my chest, and please, if I didn't mind too much, if I could KEEP BREATHING. More benadryl. They stayed for about 10 minutes until they could see the swelling start to subside and then left. The nurse was like "No freaking WAY are you allergic to BOTH these drugs! That sucks!" Yes. Yes it does. So no more antibiotics for me at that point.

In the morning the doctor who had seen me in the ER and admitted me came to see me. She very nicely explained to me that these were the two best drugs to treat bacterial meningitis, and if they couldn't treat me on top of the fact that they were mostly certain it was viral, then I might as well go home. The culture at that point was negative, but it hadn't been a whole 24 hours. Still she felt confident enough to discharge me, and the pain pills they were giving me had brought me headache to a tolerable level.

So, one CT scan, one spinal tap, and two drug reactions later I am home safe and sound. My back hurts. My head hurts. But overall I'm in pretty good shape. I have to rest and stay away from basically the entire world until Tuesday. Fortunately the boys could go to their Dad's and my sister-in-law got a flight down from NJ to watch Hannah so Dean can go to work.

This is said friend Allison, and I'm just glad you feeling better. Ugh, I'm sure it was hard for you to be the patient for once though. Although, that sleeping till 11am sounds mighty nice!!

You don't know me but I just wanted to tell you that the photo at the top of your blog is the most beautiful photo of love that there ever was -- oh my gosh, takes my breath away!

Glad to know that you are home and on the mend after that headache scare and the spinal tap. Ouch, my back aches just thinking about that!